Creole is not Cajun, & Cajun is not Creole

According to the historical records of both ethnic groups, Creole is not Cajun, & Cajun is not Creole.


Acadians (Cajuns) originating from the West coast of France (Poitou) first settled Nova Scotia in 1604. They called Nova Scotia, "l'Acadie" - hence the word "Acadien". On the onset of the "French and Indian War" which pitted France and Britain as mortal enemies, the Acadiens, aka the French Neutrals, who would not fight against their native Mi'kmaq Indian friends & family or the French, were brutally deported by the British in what is known as "Le Grand Dérangement of 1755". 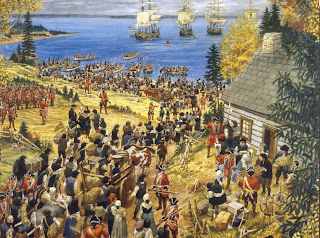 They were scattered throughout the world and in the 13 colonies were considered "prisoners of war" where they lived in "concentration camp like areas" until 1763. Half of their population were destroyed in this genocidal diaspora. Many chose to settle in French and Spanish South Louisiana starting approximately 1764 rather than risk going back to Nova Scotia to be subjects of the "hated empire" that murdered their families and seized and destroyed every inch of their properties.


Creoles  were originally descendants of early French and Spanish settlers in the New World. The term "creole" became very popular in the colony. It was used to apply to people and things native to the colony. The word comes from the Spanish "criollo" meant "a child born in the colony". The term first applied to natives of the West Indies, Central and South America, and the Gulf States region, but eventually became synonymous with the race of people found in all of Louisiana.


Intermarriages with other ethnic groups were lower among the people of Cajun descent than people of Creole descent. Although these two did mix, the Cajun ethnic group remained less diverse than the Creole group.


Cultural renaissance is being experienced by both of these sister cultures. We are of the same family of ethnicity and should stand united and proud in family love as the world gets a "taste" of the pride we call "home".

Posted in response to a Facebook post by the group "Creole, French Creoles with ties to Louisiana" - Post: "Is the term "Cajun" overriding the Creole ethnic group?"

"Papa couldn't tell us and it didn't make no sense
When the teacher told us we couldn't talk No French
No more..."
- Zachary Richard, Acadien-Cajun, artist-activist, modern day hero.

:: Two generations of Cajuns were punished and made to feel ashamed for speaking French. Subsequently our language almost died. Our parents and grandparents, as Cajun children whose only language was French, were humiliated and often beaten in Louisiana schools in an attempt to eradicate our maternal tongue. Richard's song is based on the experience of his parents.


"No French, No More" tells of the shame imparted to French speakers for doing nothing more than speaking their native language, and of how the simple desire for a better life for their children became a vehicle for that shame.

::  For decades, Zachary has led the﻿ effort to preserve and promote Cadien/Cajun culture, coastal preservation and the French language of Louisiana. Today, thanks to Acadien-Cajun activists such as Richard and the actions of The Council for the Development of French in Louisiana (CODOFIL) things have turned around. C'est très différent! French and Cajun French is now heard throughout Acadiana (South Louisiana). French Immersion schools are available in many school districts with all subjects being taught in French (except for English), and while most of the instruction is in standard French, many programs include and/or touch on Cajun French.


In addition, there is something called "The French Table" where locals in different Cajun towns gather together once a week for lunch or breakfast and speak only French. Experienced Cajun French speakers are joined by novices and they interact with one another.


Music is the other VERY IMPORTANT avenue for keeping the Cajun language alive! Cajun music has had a big resurgence in popularity and now, young people are playing the music and singing the songs.


While we have made great strides, our culture, language and coastal lands are still at risk!  Join us for The Acadien Awakening, "Le Grand Réveil", our  cultural renaissance in full swing not only in South Louisiana but the Canadian Maritime Provinces (formerly Acadia aka l'Acadie in French) and within the Acadien community around the world!

Posted by Louisiane Acadien at 10:02 AM No comments:

Pride in our language restored

.
Louisiana is a wonderful blend of many different cultures and histories. During the colonial years prior to statehood, Louisiana was settled by French, Spanish, Acadian ( Acadien) French and German settlers.
The French people of Louisiana have a rich language history. The types of French cultures in Louisiana are namely, The French (from France), Acadian French (from Acadia or present day Nova Scotia) and the Creole (or Kreyols who are a mix of many cultures including French and Acadian French) .
The Acadians: Sent to by France to settle Acadia (l'Acadie and now, Nova Scotia) largely from the French region of Poitou, they took the 17th century French language with them. This language has undergone almost as many migrations and alterations as did this great Acadian Culture (Acadien) which experienced ENORMOUS adversity against the survival of our culture.
One such adversity was the 1916, State Legislative Act 27, banning of speaking French in public schools in Louisiana. And, be informed that this was yet another attempt at the assimilation of this French culture by the English speaking Imperialists. During this horror, children were punished for speaking French. Their parents stopped speaking to them in French and spoke only English so that their children would not be punished or face ridicule.

Not only did this generation experience the horror of English imperialistic ridicule, but it was the generation that experienced having to turn their back on their family French speaking heritage that up to this point was passed on for better than 500 documented years.

This horror resulted in yet another brutal expulsion of the Acadians who had been brutally removed from their American homeland by the British in 1755. This time it was a linguistic and cultural expulsion. It was not until the 1960's that this horror was re-thought by the Louisiana authorities. The legislature instituted CODOFIL (Council for the Development of French in Louisiana) which was established in 1968.
From that time until now the French speaking population began to increase again. We are now experiencing a resurgence in the PRIDE that our families have felt since being sent to settle the American continent.
Louisiana law NOW states:
THEREFORE, BE IT RESOLVED by the House of Representatives of the Legislature of Louisiana, the Senate thereof concurring that the Legislature of Louisiana designate the cultural region known as The Heart of Acadiana within the state of Louisiana consisting of, but not exclusively, the following parishes: Acadia, Avoyelles, Ascension, Assumption, Calcasieu, Cameron, Evangeline, Iberia, Iberville, Jefferson Davis, Lafayette, Lafourche, Pointe Coupée, St. Charles, St. James, St. John, St. Landry, St. Martin, St. Mary, Terrebonne, Vermilion, West Baton Rouge, and other parishes of similar cultural environment.Therefore, since these other parishes outside of the 22 named parishes also have a French-speaking population, and by extension a similar cultural environment of French-speaking culture, they are also considered to be part of (The Heart of) Acadiana.
This region includes native Louisiana French speakers from many walks of life whether they be Cajun, Creole or American Indian. This region also includes an increasing number of heritage French speakers who have realized the importance of French in Louisiana and have dedicated themselves to learning to speak French like their French-speaking families.


.
Posted by Louisiane Acadien at 9:06 PM No comments:

Email ThisBlogThis!Share to TwitterShare to FacebookShare to Pinterest
This blog and website are in reference to the historic account of l'Acadie, and the Louisianne Colonial Acadien Settlement - Acadian settlement in South Louisiana, now called Acadiana - plus information on our cousins scattered throughout the world by the 1755 - Le Grand Derangement, the brutal British expulsion of the Acadian (Acadien) People from their North American Homeland.

For the Historic Account of l'Acadie, Nova Scotian and Louisianne Colonial Acadian Settlement and Information of Le Grand Derangement - The Acadian Deportation and Exile
Posted by Louisiane Acadien at 1:13 PM No comments: